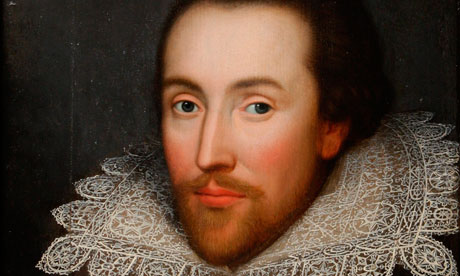 The Sunday of our most recent adventures took us to Stratford-upon-Avon, a town in the center of England that was the birthplace and final resting place of arguably the most famous Briton to ever... William Shakespeare. Often called England's National Poet, he wrote 38 plays and over 150 sonnets (poems) which have been translated in to every major language and inspired countless artists, writers, musicians, and movies. 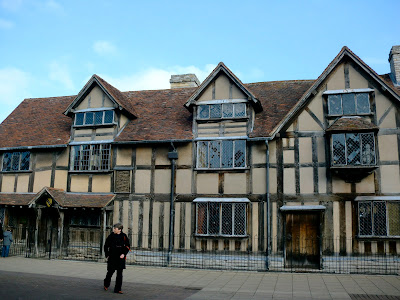 The left most window belongs to the room where William Shakespeare was born.
There were two front doors, one for the house, the other for the workshop.

Being in Stratford, in Shakespeare's home, walking where he walked... it was marvelous! We started our adventure by visiting Shakespeare's Birthplace. No one knows for sure when exactly he was born but he was baptized on 26th of April 1564. John Shakespeare, the poet's father, was a glove maker and wool dealer. The room that was his father's workshop has been restored with glove making tools, and the rest of the house has been furnished with items appropriate to the Renaissance period. 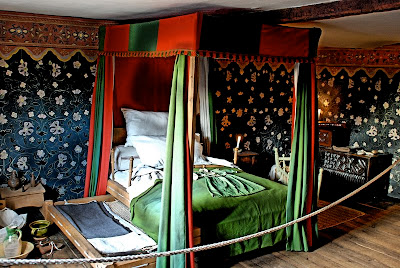 This trundle bed was used so that parents could keep
their small children nearby when they slept.
In those days only one in three children survived to adulthood.

The room baby William was born it was once covered in graffiti from people carving their names in the walls and even the windows. A few of the multitude of names paying homage were author Charles Dickens, theologian Isaac Watts, and essayist Thomas Carlyle. Some even left messages thanking the bard for his inspiring works. The original, scribbled on window panes were saved but the rest of the room was repainted. The building had been an inn (The Swan and Maidenhead) for many years, until passing out of the family's ownership in the 18th century. When the house fell in to decay it was put up for sale. The cost to purchase it was  £3,000. It was bought on behalf of the nation by the Shakespeare Birthplace Trust (SBT) in 1847, and has since been a tourist attraction, a staging place for amateur performances, and the centerpiece to the dozen other SBT locations. Current members of the SBT are Dame Judi Dench and Sir Patrick Stewart, who lend their voices to a walk through video introduction to the house. 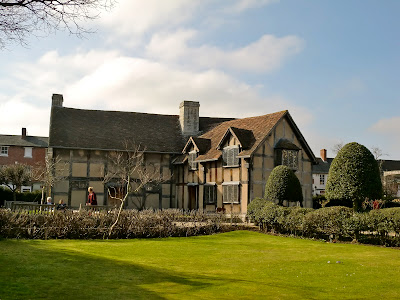 The garden at Shakespeare's Birthplace is the stage
for small summer productions of his plays.

The next location we visited was called Hall's Croft, home to Shakespeare's daughter Susanna and her husband, Dr. John Hall. It is a wonderfully preserved Jacobean era house that is home to a museum quality collection of paintings. The home is filled with the artifacts of home and professional life in that era. John Hall was cutting edge for his time, and had a successful practice based on herbal and mineral treatment. His medical notes made up large portions of medical textbooks for many years. By all accounts he was a well liked son-in-law, even treating Shakespeare in his declining years.

Susanna was Shakespeare's eldest child, and his only heir. Her twin siblings Hamnet and Judith were left out of their father's will because Hamnet had died as a boy and Judith had an untrustworthy husband. Susanna herself was a strong and opinionated woman, even able to defend her reputation when a local man slandered her with accusations of an affair. You can imagine the kind of sharp witted woman she must have been with William Shakespeare for a father and a successful doctor for a husband. Something tells me this lady could take care of herself.

Her epitaph (which was probably written by daughter Elizabeth) at Holy Trinity Church:

"Witty above her sex, but that's not all,
Wise to Salvation was good Mistress Hall,
Something of Shakespeare was in that, but this
Wholly of him with whom she's now in blisse.
Then, passenger, hast nere a tear
To weep with her that wept with all
That wept, yet set herself to chere
Them up with comforts cordiall?
Her love shall live, her mercy spread
When thou hast nere a tear to shed."

The back garden of Hall's Croft is a walled off grassy oasis. What made it particularly delightful was that it was the first warm sunny day I've experienced since arriving in the UK. We found a nice bench to sit on and soaked up the sun, surrounded by fragrant herbs and newly blossoming flowers. It was glorious! I didn't want to leave! 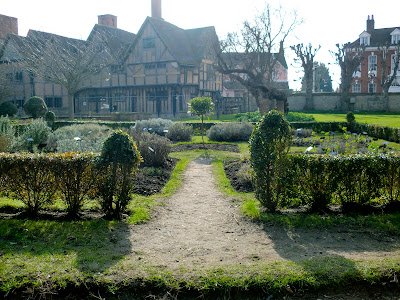 This herb garden contains plants that would have
been used by John Hall in his medical practice.
He treated rich and poor a like. 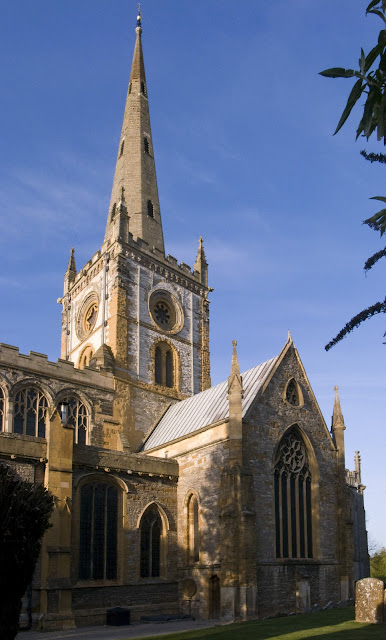 While this building dated to 1210, people have worshipped God
here for over 1100 years as evidence by its mention in a charter from 845.

Our next stop was Holy Trinity Church (pictured above). In terms of landmarks, this one had the most historical significance, because it was here that almost all records of William Shakespeare were taken and preserved. Everything from his baptism, marriage to Anne Hathaway, the births and baptisms of his children and his death are all registered here. In the large chancel, just beyond the main sanctuary of the church is the very grave of William Shakespeare. He is surrounded by his wife, Anne, their daughter Susanna and her husband John Hall, and his granddaughter's husband John Nash.

Pages from the original church register are on display showing the records of
Shakespeare's baptism and death. Church registers were like birth and death
certificates in those days. He was baptized April 26, 1564 and
died April 23, 1616. Can you find his name? 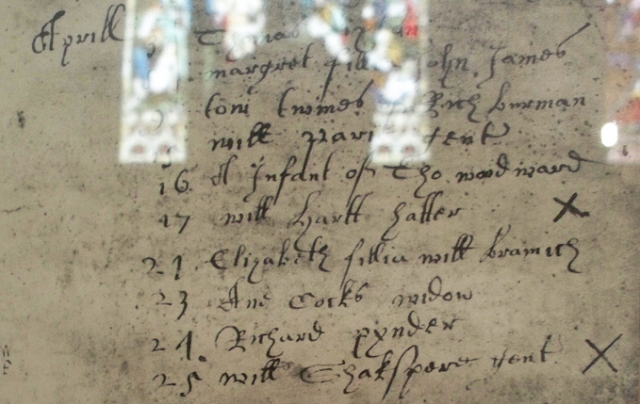 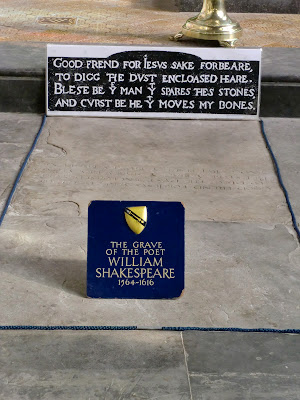 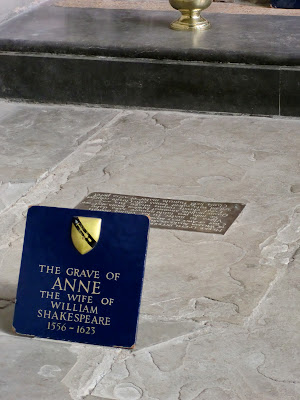 The last location on our adventure was a good thirty minute walk from the center of town... Anne Hathaway's Cottage, which is the best preserved of the three homes visited. Several generations of Hathaway's lived in this cottage until it was purchased, along with the existing furnishings, by the SBT in 1892. Much of the interior is just as it had been during Anne's life. She was the daughter of a well-to-do farmer when, at the age of 26, she became pregnant with 18 year old William's child. They had a quick wedding, but no matter how rushed their courtship and nuptials were there is plenty of evidence to prove their marriage was full of affection. 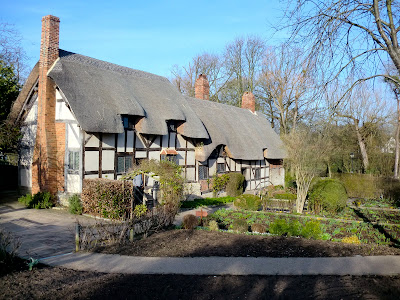 Sonnet 145 includes a pun on Anne's name with "hate away" sounding like Hathaway.

The Hathaway home was originally a farm house, with the garden you see in these picture once being part of the much larger farm. The cottage is often described as the most romantic of all the SBT locations, and it's easy to see why. The timbered cottage is beautifully preserved with it's thatched roof, original fixtures and historically significant furniture (including the Hathaway bed which dates back to Shakespeare's time). 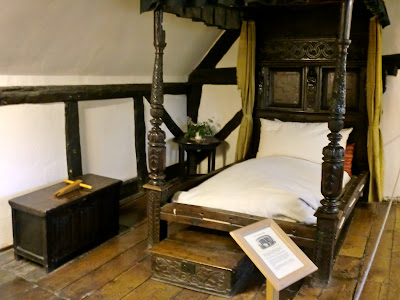 That is a really fancy bed. 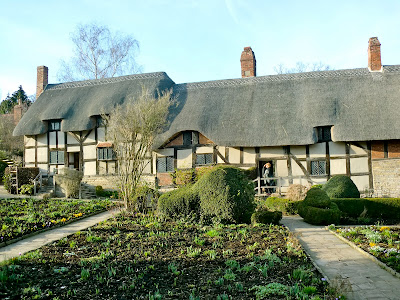 The picturesque side garden had just started sprouting new spring flowers.
Flora and fauna feature in almost all of Shakespeare's works, and are
often used as symbols or metaphors.

The rest of the garden features winding footpaths, benches to sit and take in the scenery, and exhibition spaces for out door art and interactive medias, including a bench with a built in stereo that plays recordings of Shakespeare's most famous sonnets. The entire place is made for visitors to interact with in the hopes they'll be put in a state to best understand Shakespeare's romantic writings.

That just about concludes my Shakespeare filled day. I could have gone on and on, but really I think you'd get bored. William Shakespeare has pretty much been an ever present figure in my consciousness, which is what makes visiting Stratford-upon-Avon so fulfilling for me. I've loved his stories since I was a kid, having been introduced to them through film adaptations (a favorite being Much Ado About Nothing) and then later on when I studied them in school. You can see all around the town of Stratford how Shakespeare could have been inspired and influenced, and it's undeniable that he inspired and influenced the town. You can see it in the names of shops, pubs and street, you can see it in the statues erected all around the town center of his indelible characters, on the plaques quoting his verses... there are even free impromptu street performances of his work for the enjoyment of anyone and everyone within earshot.

This year I'm going to make a concerted effort to broaden my awareness of Shakespeare by reading 4 of his plays: Richard II, Henry IV Part 1, Henry IV Part 2, and Henry V (all of which are being produced as TV movies this year). I also want to return to his hometown in April for the Shakespeare Birthday Celebrations. I hope this inspires you both to learn about Shakespeare yourselves. I'm sure Grandpa would love to help you out with that.

Love you both!
~Auntie~ 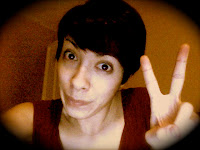 little bird
Huntingdon, Cambridgeshire, United Kingdom
"There was never yet an uninteresting life. Such a thing is an impossibility. Inside of the dullest exterior there is a drama, a comedy, and a tragedy."
— Mark Twain


I may have travelled far from home, but the world is proving to be full of new joys, challenges and learning experiences. I'm writing mainly to share travels with my family and friends back home in the United States, primarily my nephew and niece who I miss the most.


"The Lord is my light and my salvation; Whom shall I fear? The Lord is the strength of my life; Of whom shall I be afraid?"
~PSALM 27:1